skip to main | skip to sidebar


Okay, so it's a few days after the end of May's London Expo, but this is the first chance I've had to do my write up since then so here it is. :P 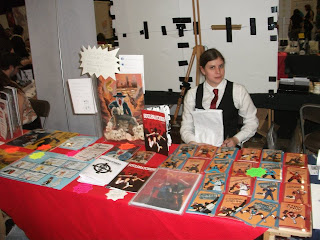 After the (as it turns out, unnecessary) worry about the possibility of no longer being allowed in Expo's Comic Village, I decided to get a shift on with rebooting my Soulsnatchers comic so I could take it with me to sell. If anyone missed the drama, MCM are starting to crack down on people using the Comic Village as a dealer area without having their own comics and artwork to sell. Rules were rather ambiguous at first, but it turns out as long as you do comic artwork/ writing of some sort, you're good to go. :)

So there I was on Friday evening, making my way to London and excited about picking up my Soulsnatchers comics at the venue - printed by UKComics and very kindly held by Matt Dyson until I got there on Saturday morning. As well as the comics, I brought with me some reprints of my Anime Convention Survival Guide poster and postcards, Portal and Zelda prints, my Team Fortress 2 postcards and a brand new print featuring Alusius, one of the main characters from Soulsnatchers.
Also making its first Expo appearance was the new Midlands Comics Collective "The End of the World", in which I have a short story, along with Laura Howell and Josh Clarke who were seated either side of me during the weekend.

Unfortunately, I'd somehow acquired a rather annoying throat infection on Thursday which meant I was losing my voice and couldn't talk much over the weekend. Nothing like being hoarse for a few days to help you practise your charades skills!

Setting up on Saturday morning, there was already a huge crowd gathering for the show's opening. Andy and I were still setting up when they were let through the doors at 9am, but as soon as we started getting things out, people were ready to buy them, so a good start to the weekend!
For the entire day the hall was absolutely packed, which made getting in and out hell, but it was definitely good for sales.

Sunday was rather quiet, more so than usual on an Expo weekend. We could only think that people were outside enjoying the sunshine rather than being stuck indoors and baking in their cosplays.
One thing I'm pretty certain of is that I really need to set some time aside to deal with my point of sale stuff. True, fan art does bring people to the table, but I always forget to do anything like banners or display items until the last minute and that could really help give my presence a boost. I'm going to make sure I do this for my next con.

What made me the happiest with the things that people bought from my table, was that there was quite a bit of interest in my Soulsnatchers comic, even though I didn't sell an awful lot of them. A couple of buyers were repeat customers, which was awesome, including one person who has the same name as one of the main characters (if you're reading this Killian, I definitely do remember you from last May, just had my wires a bit crossed! Hope you enjoyed the comic. ;) ).

A few people bought "The End of the World" as well and Laura passed a copy on to a guy from the Geek Talk radio show to review, so fingers crossed that it's well received!

As I mostly stayed in Comic Village, I didn't get to see a lot of the show, but here are my thoughts on a few things to do with the weekend.

Organisation
No problems for me here! Straight in with no fuss, Was even able to get a badge sleeve and lanyard, which I've not been able to do at previous Expos because they ran out.
I was a little flustered on Thursday because the venue were only taking deliveries on Thursday and Friday morning (wasn't really explained why this was), but fortunately this was sorted very efficiently by the guys at UKComics who sent a courier to deliver our comics to Comic Village.

Layout
Comic Village was bigger than ever this May. As well as the two blocks of tables that they normally have, a third was added closer to the centre of the hall. There was also more room to get around, which had been a bit of a problem previously if you needed to sort stuff at the front of the table.
For the rest of the show, it seems like a lot of popular stands were grouped together at the front of the hall and people were constantly huddled around those, blocking the aisles. As previously mentioned, this caused great difficulty in getting in and out of the hall(didn't help that toilets, food and drink were outside the hall). Probably not an awful lot that could be done about it as the stallholders get to choose their location, but hopefully measures will be taken at future events to stop it being such a problem for getting around.

Attendance
Saturday was pretty much a record-breaking day all round for Expo. Although it was crowded due to the sheer amount of people, it did mean that they were coming to the Comic Village in flurries as they passed by all the dealer tables and came out of the panel room (which was in the top corner). I made more money that day than I have on any other day at a con and it looks like a lot of others did too, so that was encouraging! :)
Sunday kind of killed it a bit, as there were a lot less people than usual (even for a Sunday) and it seemed like most were just passing through Comic Village on the way to other things. Can't really blame anything for that though and through previous experience, this seems to be the exception and not the rule. Still hasn't put me off getting a table in October for my fourth London Expo!

Cosplay
As I didn't spend much time away from my table, nor did I attend the Masquerade, I didn't really get to see any awesome cosplays. There were a few cool Zelda ones, a great femme Loki and Thor and oddly enough a Parsley the Lion. Another highlight was Josh's friend's little sister who was incredibly cute in an Assassin's Creed outfit! :D

People
The best part! :)
Everyone was so awesome and friendly, from the other CV sellers and the staff I talked with, to the customers. Saw a few familiar faces, including Lisa Cummins, Lee Bradley, David Shirley, Donna McGarry, Elenawing and Wonchop, and met some new people from the Comic Village Alliance group (some of whom I recognised at previous cons but hadn't really talked to). Didn't get to see everybody unfortunately as I either missed out or they didn't get to London, but they're all awesome and have great comics and arts so go and check them out! I've added a list of some of the members and their websites at the bottom of the post.

So although it wasn't the best weekend sales-wise or from the lack of voice, I did have fun and hope to have even more next time! :)

----------------
On a more serious note though, there is something I should help draw to people's attention.
Artist Donna Evans (Tavington on DeviantART) is trying to get something done about the guy selling stolen artwork on canvases at various MCM events. She's got quite a bit of help from people spotting the work in her photos of the stall and linking to the original artists and is also getting in contact with Expo and various watchdog agents, but we need the word spread as far as possible so it doesn't continue to happen!

Here are her DA journal and Tumblr links:
http://tavington.deviantart.com/journal/STOLEN-ART-AT-MCM-EXPO-Please-read-Update-2-305116737

Apologies if I've missed anyone out! Please let me know so I can add you to the list.
Posted by Ryuuza at 16:50

I thought it was a bit wierd that Marvel comics were kind of crammed away at "one end" of the comic village, they really ought to have had a big table out on it's own ("Tokyopop" did and they don't even exist any more!). Still the crowds meant that I could go "up and down" the rows of small-pressers and not miss anything, as one end was always blocked I had to go back the other way XD.
I've always thought they ought to be spreading the con out, beyond just the one hall. Saturday this year confirmed it! In previous years there's been some areas "round the back" of larger stalls (against the wall) where people could sit, which didn't exist this year. Also the hall where people qeue for day tickets is always half empty. If they've paid for all that space why not use it? It could either be a dedicated small press / artist alley area (I bet if they offered 150 small tables at £50 each, they'd sell the lot!), OR it could feature some of the biggest anime / game publishers, with big plasma screens blasting trailers at the qeue. A captive audienced of hundreds, who'd say no to that?
There was also some other strange decisions, for instance the always-crowded Yaoi Guy's stall used to be over in one corner, but this time was just inside the door! Also the con hall seemed darker to me this year somehow. The general "atmosphere" I remember from previous MCM's is that the con hall was "white", but this year it felt more "muddy brown". If you get what I mean XD.
Oh yeah, inside the con hall was much cooler than outdoors in the direct sunlight, beleive me!

Ryuuza
I'm a comic illustrator, digital animator and instructional designer from Solihull in the West Midlands. As well as being a member of the Midlands Comics Collective (MC²), I work as a designer and animator developing digital learning material (currently working on training software for National Grid).

People or things that are generally awesome